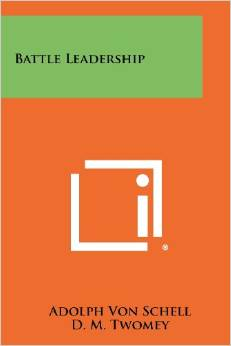 
Von Schell's work is a fascinating treatise on leadership under combat conditions. A veteran of the First World War, he fought throughout the conflict on all of the fronts from 1914 until the Armistice in 1918. Following the war he was retained in the German military and attended the Fort Benning Infantry School course, graduating in the Advanced Class of 1930-31. During his time there he was asked to provide his insights into the leader in a combat environment as the level of experience within the US Army was relatively small at the time. What resulted was an insightful series of short papers on varying facets of the impact of the combat environment on both the leader and the soldier.


He emphasizes throughout the fundamental differences between a peacetime training environment and the actual realities of combat. Thus, he stresses the absolute critical need for as much realism as possible when training. He also discusses the limitations that fighting places on one's ability to communicate and direct. Specifically, he talks about the need for the leader to both make and to seen to make decisions that meet the demands of the commanders intent - decentralized command.


He does not limit his scope to the leader, he also discusses the needs and challenges for the soldiers themselves. One of the areas that he places great deal of attention upon is the need to ensure that new soldiers are liberally intermixed with older veterans to both teach and steady them. Additionally, he discusses the critical need for soldiers to have faith in their chain of command thereby ensuring trust when things are at their most confusing.


While the book is short and obviously a product technologically of its period, the tenants presented by this combat leader are universal and timeless and more than worthy of study and reflection. Von Schell closes his lectures with an interesting discussion of the role of the German Army following the end of the war; its own challenges and rebirth, how it strove to meet the demands of the Versailles Treaty while concurrently being called upon by the German government to deal with the civil disturbances that convulsed the Nation and external invasions from Poland. The fact that it was able to successfully deal with these problems serves as both vindication and testament to the training and professionalism of its leadership. A fast and engaging read and very highly recommended for aspiring leaders at all levels of military and civilian command and management.
Posted by Chris Buckham at 08:41 No comments:

The Defence of Moscow 1941: The Northern Flank - Jack Radey and Charles Sharp

The information presented was written by Chris Buckham; however, it was published in Sabretache Journal. Therefore, the material is reproduced here by the author with the permission of the Journal. If you would like to republish this information or refer to excerpts please contact: Paul.Skrebels@unisa.edu.au  Website for the Journal is: http://www.mhsa.org.au/journal.html
Title: The Defence of Moscow 1941: The Northern Flank 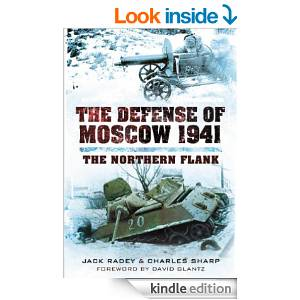 
The Battle of Kalinin has never received the degree of attention from history that it deserves. Serving as the first reverse of the Wehrmacht by the forces of the Soviet Union, it has traditionally been subsumed by the larger Battle for Moscow itself; from a strategic perspective, it represented a critical reversal to ultimate German success. Had the Wehrmacht succeeded in their plans to launch a pincer movement between Army Group North and Centre forces (thereby trapping six Soviet armies and the Novgorod Operational Group - a force numbering larger than the 600,000 taken at Vyazma) they would have succeeded in rendering an irrecoverable hole in the Soviet lines. As it was, German overestimation of their own capabilities and a gross underestimation of the state of the Russian forces facing them, a desperate and driven defence by scratch Soviet forces thrown into the fray, the weather and perhaps most significantly, a failure of the German logistical system all combined to undermine the German plans.

The KTB (kriegstagebuch - daily combat report) of the 3rd Panzer Group clearly indicates that the German's had not planned or stockpiled fuel for operations past Vyazma. This is key to understanding why the Germans failed. All of the other aspects/influences upon the battle, while individually significant, would not have prevented the Germans from succeeding. The fundamental key to German success up to this point was decentralized control and speed. The ability to undermine Russian command and control and continuously stay ahead of their ability to effectively react was the cornerstone of German dominance. Once the Germans had outrun their logistical support lines, they enabled the Soviets time to consolidate forces and to mount an effective defence. Having said that, the authors acknowledge that all intelligence indicators for the Germans at this time seemed to point to a fundamental collapse in Russian defensive capability; this would explain why it was that they were willing to continue to extend their lines of advance despite a clearly recognized identified logistical risk.

The authors have done an admirable job of tracing the battle as it unfolded over the period 7 to 25 October. Emphasis and perspective is given equally to both parties as the Russians and Germans grappled with the rapidly changing situation. It is fascinating to witness the degree of confusion emanating from HQ’s as intelligence analysts and commanders struggled to stay ahead of the unfolding tactical situation. The difference in the doctrinal nature of German decentralized and Soviet centralized command concepts manifested themselves in the ability of the Germans to continue to advance in spite of crippling logistical shortages and the Soviets throwing Brigades into battle with no operational picture whatsoever.

The authors have provided extensive end notes and detailed orders of battle outlining all of the units engaged in operations during the Battle of Kalinin. Additionally, both Soviet and German orders and reports relating to the operation are reproduced verbatim with individual evaluation by the authors. It is very enlightening and sobering to read about individual German soldiers holding signs on the sides of the road asking for a trade: 10 litres of spirits for 1 loaf of bread (and this when they were still advancing).


This book reads extremely well and is a very noteworthy evaluation of a little known aspect of the drive on and the defence of Moscow. It also represents a fitting testament to the competency of the individual fighting soldier at the tactical level on both sides. It is also an extremely interesting study on the critical role that logistics plays in defining the line between success and failure. A great book, very highly recommended.
Posted by Chris Buckham at 11:29 No comments:

The information presented was written by Chris Buckham; however, it was published in The Canadian Army Journal. Therefore, the material is reproduced here by the author with the permission of the journal. If you would like to republish this information or refer to excerpts please contact the Editor Canadian Army Journal (ANDREW.GODEFROY@forces.gc.ca). Website for the Journal is: http://www.army.forces.gc.ca/caj/default-eng.asp?view=more 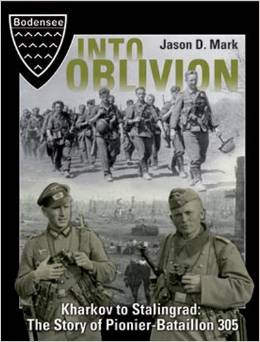 
The art of creating engaging history is a rare gift. It requires the author to present the material of the past in such a way as to capture the imagination and interest of a reader with little to no connection with the period in question. Jason Mark has once again risen to the challenge and surpassed the mark with his book ‘Into Oblivion’.
This unit, Pionier-Battalion (P-B) 305, part of the 305th “Bodensee” Infantry Division, was not exceptional, it was not elite nor was it key to a particular victory. It was made up of soldiers that were serving occupation duty in France when transferred to the Eastern Front in 1942. Like any unit, it had stronger and weaker members, the vast majority being average (although I would submit that any soldier engaged in fighting in WW2 was anything but average).


Mark has seamlessly interwoven a tactical, very personal story of the 305th P-B within an operational and strategic context; thus the reader is much better able to conceptualize what is being experienced by the soldiers. This ‘living history’ stems from many first hand sources but, primarily, the personal notes and photographs of Oberleutnant Grimm a veteran of the 305th P-B and survivor of not just the war, but heavy combat during the Battle of Stalingrad (he was furloughed on 14 Nov and could not rejoin his unit afterward) and the remainder of the war.


The maps and photographs correspond closely to the narrative and provide in-depth visual references for the reader. One begins to appreciate the excessive toll that the eastern front took on soldiers, horses and equipment as, for example, marching 12 km’s took eight hours in the clinging mud. Additionally, the description of the effort required by the pioniers to destroy a single T-34 (before the advent of the panzerfaust) is terrifying; reinforcing the accomplishment relating to the award of the Tank Destruction Badge.


Mark augments his narrative with numerous foot and end notes that add depth and dimension to the story. Additionally, he includes, as appendices, listings of individual biographies of the officers of the battalion, staffing rosters and iron crosses awarded and an in-depth bibliography. He also closes off the history of the Battalion with detailed descriptions of the post-Stalingrad experiences of the survivors (of which there were six from the Battalion); it is both sobering and sad.


What is also fascinating about the nature of this narrative is the insight it provides into the German tactical and operational doctrine. How units interacted between themselves, degrees of interoperability between the Luftwaffe (Air Force) and the Army, the expectation/training for tactical command and the relationship between the officers and senior NCO’s is all discussed through the lens of the correspondence of the soldiers themselves as well as through unit histories and battle reports. Also, the reader comes to appreciate the changes in Russian tactics in 1942 and the challenges that it presented the German High Command as they strove to develop plans to counter the Russian retreats and the soldiers as they exhausted themselves (and their logistics) trying to keep in contact.


This book is a thought provoking and humbling expose on the experiences of war from the very 'coalface' of conflict. The author has presented his subject as they would have wanted it; in their own words without embellishment. He has framed their experiences into the greater canvas of the war in 1942 in southern Russia, leading up to and including the conflagration that was Stalingrad. For the historian, professional or casual, this book is a vital addition to anyone’s library.
Posted by Chris Buckham at 11:04 No comments: