This review was submitted to Soldier Magazine. 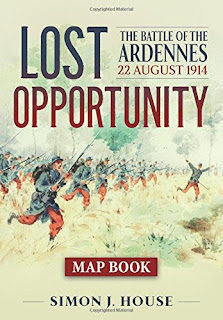 The author has undertaken an outstanding analysis of the French efforts to disrupt the German Schlieffen Plan by striking at the hinge of the German advance in the Ardennes. Despite achieving both tactical and operational surprise and having heavy numerical superiority, the French failed utterly in their endeavours. His book reviews the battles themselves, the qualities and competencies of the four key commanders involved (two German and two French) at the operational level as well as the doctrinal and training policies of Germany and France in the years leading up to the war. A superb study and a publication of the highest quality.
Posted by Chris Buckham at 10:30 No comments: 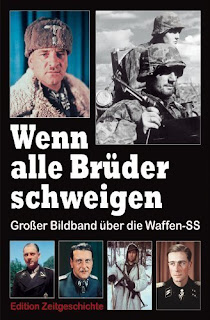 In the early 1970’s The Association of the Waffen SS set out to create a commemorative book for their members that memorialized their wartime experiences in photo’s. The call for contributions was met with an overwhelming response from veterans and their families. Thus it is that this book contains literally hundreds if not thousands of never before seen photos of the training and wartime experiences of all branches of the Waffen-SS. The authors have drafted an introduction that discusses the development, recruiting, training, wartime and postwar experiences of the units as well as their international recruitment; however, the vast majority of the book (98%) is given over to photographs. All text in the book is in German and English. Also included are photos and descriptions of rank, uniforms and unit emblems.

The book is a fascinating picture study of the Units and their participation in the war. Following the cessation of hostilities, the Waffen-SS presented a difficult problem for the post-war German government given its history. Members and their families were denied any kind of support from the Government and were not allowed to join the newly formed German Heer (Army); they therefore relied upon themselves and their associations for support.

The introduction to the book was drafted by SS Oberstgruppenfuehrer and Genraloberst Paul Hausser, senior General of the Waffen-SS just before his death in 1972.

The book is not political nor is it an apology, it represents a pictorial history of the some of the hardest fighting, most capable and controversial units of the German military in World War 2 and I recommend it for anyone with an interest in German Second World War history.
Posted by Chris Buckham at 10:25 No comments: 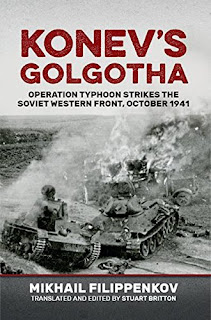 This review has been submitted to the Canadian Army Journal.

In the period following the collapse of the Soviet Union, the archives of the former Soviet military were made available for historians to access when researching books relating to the Second World War. Unfortunately that window has now been significantly restricted again, limiting the ability of authors to provide a balanced accounting of events on the Eastern Front; this challenge was exacerbated by the systematic destruction of Soviet Unit records relating to operations where the Soviet Union suffered significant reversals. Operation Typhoon, the German drive for Moscow in October, 1941, falls into this category.

This work, which focusses upon the operational and tactical events running from 25 September to 12 October during which the pocket at Viaz’ma was closed, primarily deals with the Northern arm of this drive led by the Panzergruppe 3. The author traces the events leading to the capture of the town of Sychevka, a point north of Viaz’ma and critical to opening the road to Moscow. The author, a Russian national, does his best to provide a balance in the narrative between the Soviet forces of Konev’s Western Front and the German forces; unfortunately he is precluded from doing so due to the fact that all archives relating to Stavka (Soviet high command) and Front documents are still sealed. Thus, while he is able to draw some information from other sources, the book is mainly told from the German perspective.

Nevertheless, the approach taken by the author of a daily recitation of events does highlight some very interesting points on both sides: the quality of German command and control is evident in their ability to maintain decision making momentum over the Russian leadership; the dramatic changes in temperature and its effect upon the operational capabilities of both sides (the author refers to weather and temperature at the beginning of each day – the first wet snow fell on 7 October and the temperature fell to -40 at night by 10 October); the inability of the Germans to logistically maintain their forces and the incredible burden that this shortfall placed upon the rear services and the luftwaffe. Throughout the book the author refers to German units running short of fuel and the conscious decision by the German high command to not issue winter kit at the beginning of Typhoon due to the delay it would cause to the start date. The author also draws attention to the more effective combined arms operations of the Germans and the Russian lack of effective air reconnaissance. Finally, he acknowledges the overall superiority of German leadership and equipment while concurrently recognizing the strengths of the Russian forces in defensive operations.


Helion has maintained its high standard of quality with the production value of this work. This book is a quick and interesting read but should be read in conjunction with other authors such as David Glantz, Lev Lopukhovsky “The Viaz'ma Catastrophe, 1941: The Red Army's Disastrous Stand Against Operation Typhoon” or Svetlana Gerasimova’s “The Rzhev Slaughterhouse”. I also found that the maps provided with the text did not provide much detail on the area’s in the narrative; a shortcoming when the book is broken into daily analysis. Nevertheless, an interesting and engaging read.
Posted by Chris Buckham at 17:42 No comments:

Wind in the Wires - Duncan Grinnell-Milne 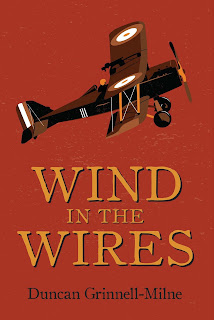 This review has been submitted to Airforce Magazine.

Title: Wind in the Wires

Autobiographies of the early days of the Royal Flying Corps (later to be known as the Royal Air Force) never cease to impress. Perhaps it is the sense of wonder and élan with which these early pilots and observers recount their adventures; and that was what it was for many of these young gentlemen, an adventure. Wind in the Wire is the author’s story of his time in the RFC and his experiences as one of the early, and late, pilots of the First World War.

The first thing that strikes the reader is the prose with which the author writes. Despite not being a professional writer, he is able to turn a phrase in such a way as to convey to the reader a clear sense of the image and the humanity behind the description. His humility, joy, fears, frustrations and doubts are expressed simply and honestly, without pretense or embellishment. He is as forthright about his insecurities at learning to fly and joining an operational squadron as he is about his growing confidence and aggression in the air.

This is a book solely about his flying period; from when he reports for pilot training from his Regiment in July, 1915 to his last flight of the war in 1919. The narrative may be divided into three distinct parts: his training, his first operational squadron and being captured and finally his escape and rejoining 56 Squadron for the last months of the war. Each section alone stands as a fascinating tale of growth and adventure; taken together they represent a life’s worth of experiences compacted into three and a half short years.

The first section relates the author’s experiences in learning to fly as well as his first Squadron in France. What stands out is the quality of leadership and, during this time of the war, the lack of knowledge relating to even basic flying. Skills such as spinning, formation, bombing and gunnery were all being learned ‘on the fly’ and even the more senior pilots did not know much more than the most junior.

The author does not dwell on the details of his incarceration period in any detail save that made numerous attempts at escape and that he turned down multiple offers by the Germans to have him transferred to neutral Holland where he would be precluded from further participation in the war but would not be held to the same degree of restriction as he was in Germany. It is very interesting to learn of the different approaches that many of the internee’s adopted as a result of their newfound circumstances and the options available such as transfer to a neutral country.

The period transitioning his escape and return to flying duty is of particular interest because it represents in fact a time capsule. During the two and a half years of his time as a POW, the entire spectrum of air combat had utterly changed. The doctrine, airframes, weapons and organizational structure of the RFC (and the Germans) was nothing like it was when he was captured. His description of endeavouring to get back into operational flying on the Western Front, his retraining and the “Rip van Winkle” effect of coming to grips with his new surroundings is gripping and absorbing. His treatment at 56 Squadron as somewhat of a carnival freak due to the fact that he was returning aircrew from a bygone era (escapees were never returned to combat roles at this time so he was doubly unique) is very interesting to follow. Even his description of the advent of bureaucracy within the RFC when compared to his first arrival in France in 1915 is both insightful, telling and humorous.

Perhaps the most poignant aspect of the book however, is the concluding pages as the war comes to an unexpected end. The author, being only 23 at this time, relates the deep sense of loss and dislocation as the Squadron and the War, representing familiarity, structure as well as profound comradeship, is systematically, and without fanfare, stripped down and disbanded. Although it is impossible to fully render the sense of isolation felt by the author and his peers (indeed if one has not experienced the intensity of war and its effect upon its combatants, mere words have difficulty translating it), G-M’s writing does convey to the reader the emotional turmoil as few books have.

Although this book relates the experiences of a war that was fought one hundred years ago, its significance reverberates even today. This book is a classic of airmanship and courage and should be read in conjunction with the likes of Cecil Lewis’ Sagittarius Rising, Arthur Gould Lee’s Open Cockpit and No Parachute as well as VM Yate’s Winged Victory. An outstanding work of literature and a must for any historian of the military arts.
Posted by Chris Buckham at 08:56 No comments: