Original written by Chris Buckham. Published in the Journal of the RCAF. 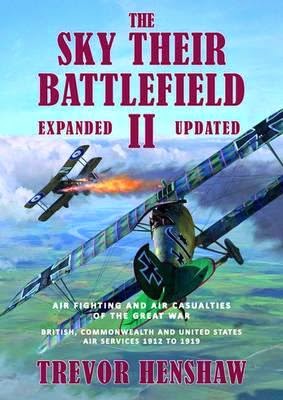 
Historians undertake two main roles in the course of their studies, one is to gather first hand recollections, information and statistics and secondly, to take that information and interpret and recount it for future audiences. Henshaw has produced a reference work of enormous breadth and depth, cataloguing the losses, on all fronts, of the British Commonwealth airforces from 1912 until 1919, as well as United States casualties from 1916 onwards.


The book is structured in a very logical way with an easy to follow layout, ensuring the reader can access whatever aspect of information that they are seeking quickly and efficiently. Commencing with a guide on how to follow the nomenclature of the book, he has incorporated in excess of 16,800 casualty (wounded, missing and killed) write-ups into the body of the book broken out by year, region and accident or combat. He has also referenced thousands of German records in order to confirm Allied losses.


Interspaced within the text is an ongoing narrative of significant events that add dimension to his work. It is very easy to view these losses in a very two dimensional way, especially given the common structure of presentation; however, Hernshaw has provided hundreds of photographs that clearly present the grim results of many an airman's dream. His interjections highlight interesting events within the chronological layout of the text; thus he identifies, as examples, new aircraft introductions , air lessons learned during the Ypres battles, Hindenburg line preparations, and a myriad of other information relating to the development, execution and challenges of aircraft design and combat. The central theme however, of recognition and identification of the fate of aircrews, remains the central focus throughout.


Added to this publication is an Accident Addendum that outlines the fates of the 4,530 aircrew that were injured or killed in circumstances not directly related to enemy action. This is both very appropriate and informative as history tends to forget about those whose sacrifices resulted from old airframes, limited experience, poor air doctrine and a host of other 'behind the lines' reasons. Henshaw also incorporates those 'other rank' members who were lost but there is no known cause; their sacrifice is no less telling or significant.


Another aspect of this work that lends weight and credence to it as an outstanding source for future historians is the analysis undertaken by the author of the information that he has gleaned from the official records. This represents the second phase of historical relevance: statistics are only as worthwhile as the interpretation of what they tell you. His evaluation and presentation in table form of the operational cause factors (ie bombing, strafing, reconnaissance etc) of loss is a goldmine of information in and of itself. His appendices include such components as: Western Front Losses 1914-1918 by Aircraft Type, Nature of Operations, Cost of Aircraft and Engines, AIR1 Casualties from Kew, RFC and RAF Roles of Honour and Analyses of Losses throughout the war from 1912-1919. Each of these is presented as useable raw data with emphasis placed upon key aspects and markers such as casualty rates by aircraft type.


The amount of time and effort associated with researching and cataloguing the information within this book is staggering. The scope and depth of the analysis and the discussion of what the statistics amount to is second to none. Henshaw has provided for the reading public and the future historian, a treasure trove of information and a testament to the sacrifice of the personnel of the Royal Flying Corps, the Royal Air Force, Royal Naval Air Service, the Commonwealth air services and the nascent United States Airforce. One only begins to appreciate the vastness of the operations and the geographic scope of the undertaking when it is laid out for you in a format such as this. Henshaw is to be commended for producing a book of such richness and gravity.
Posted by Chris Buckham at 08:22